Audi Lights Up With OLEDs

Audi Lights Up With OLEDs 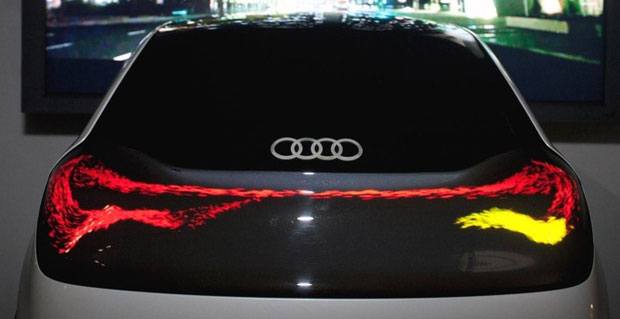 Sitting in long traffic queues can waste hours of our lifetime and the back of a car isn’t the most inspiring of views. However this could be set to change! Car manufacturers Audi have created a concept car, which uses OLEDs instead of regular tail lights. The OLEDs create a light swarm effect moving across the back of the car, reacting to the motion of the vehicle.

The OLEDs react to the movement of the car, so if for example, the wheel turns left, the lights flow left also. As the car breaks the swarm lights move up to boot. Audi have designed this intuitive technology so that drivers behind can see exactly what the driver of the Audi is doing.

However, motoring organisations say that although the new technology is clever and interesting, it should remain concept. They feel that the swarming effect created by the lights may be too distracting for drivers and isn’t as clear as Audi are making out. Some organisations feel that the new technology may cause some confusion to other drivers and increased risk of accidents.

The OLEDs use an organic material, which light up when an electric current is passed through them. It is a thin material so doesn’t add any bulk to the back of the car unlike conventional tail lights. OLEDs are fast becoming an exciting technology and have massive potential in various applications. Being ultra thin and lightweight, OLEDs can be applied to almost anything, anywhere, from TVs to clothing. Although it has many uses, OLED is still a developing technology and doesn’t come cheaply. At the moment it isn’t quite as robust as some other lighting technologies either. Due to the organic materials used, protection is needed to ensure the delicate displays are not damaged. With tail lights however, this does not seem to be an issue. With a strong protective cover and area of space available to work with, OLED seem a perfect replacement for traditional tail lights.

Sitting behind an Audi with ultra futuristic OLED tail lights would certainly brighten up the dullest of journeys and the idea behind the technology also has the potential to make driving even safer. But as it stands this is only a concept idea so we wont be seeing it on our motorways quite yet. Keep your eyes peeled though!