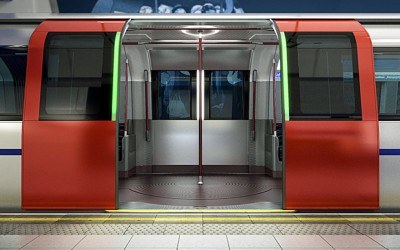 The London Underground Tube is getting revamped, complete with LED light bulbs.

The new tube of London will be air conditioned, WiFi enabled and have LED lights installed. There will be a strip of LED lights on the doors and inside that will warn passengers when the doors are about to open and close. The underground train will now all be one instead of individual carriages and will have bright LED light strips on the front. LED light bulbs are more energy efficient and last longer than other bulbs this will reduce a maintenance, helping the busy London Underground to run more efficiently. Paper adverts will no longer be displayed, they will be changed to LED screens that can be updated with real time information and advertising messages. Expected to last for 30 years running 24 hours a day.

One of the designers of the ‘new tube’, Paul Priestman, told Dezeen Magazine:

What we’ve got is something which is a recognisable face, a modern face, and you’ll see that it’s got a new lighting system which we’ve developed for the front, which is a distinctive shape and brings modernity to it. The face of the train is very important – it’s the thing you see as it enters the station. The interesting thing you see as it enters the station. The interesting thing about projects like this is that they will be running for forty to fifty years so you’re designing something to last an immensely long time and they’ll be used 24 hours a day because the tubes will now be operating 24 hours a day. The [LED strips] are continual light which illuminated round the side, and then when it’s in reverse then these glow red rather than white, so it gives the correct illustration but also gives this character and a feeling for London, really.

LED lighting have the advantage of instant start-up, and extremely long life. Good quality auto LED lights have a lifespan up to 50 000 hours.